Title: After All This Time
Author:

vilabelle
Pairing: J2, Gen/Danneel, Jared/Stephen, J2DG
Rating: NC-17
Word Count: 7,273
Warnings: Internalized homophobia, het sex, Chad
Prompt: Kinky Neighbors: The Mitchells and the Harts have been next door neighbors and friends for the past year. They have loads in common; double incomes, professional careers, no kids...and a kinky streak.

Now they're about to become very good friends...with kinky benefits.

The sex between them all is hot, naughty, and unbearably exciting. It isn't merely swapping partners and moving to another room; it's true foursome sex, same room, same bed, all four involved. For Drew and Cat Mitchell and Logan and Alexis Hart, it's about barreling through boundaries none of them have ever crossed before, doing kinky things they've only fantasized about. But when they begin to exchange not just sex but emotional connection, the problems start; a little jealousy, feeling left out, wanting more from the wrong partner. Can two couples really share everything without losing it all?


Summary Jensen's a pretty happy guy. He's happily married to his hometown sweetheart, Danneel, and he's got a thriving law practice in Austin. He lives next door to his lifelong best friend, Jared, who is married to his and Danneel's girlfriend, Gen. When Danneel and Gen suggest bringing Jared into the bedroom, though, things get weird. Jensen thought Jared had gotten over his schoolboy crush on Jensen, but it turns out that Jared isn't the only one with lingering feelings. 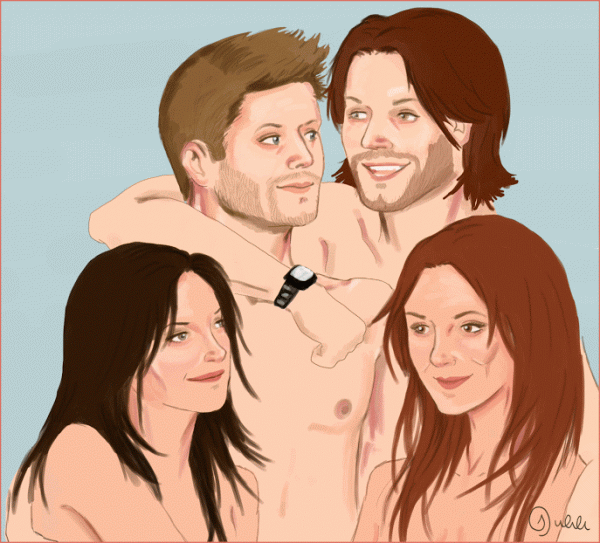 Jensen wrapped his arms around Danneel’s waist and nuzzled into her neck. “Happy, sweetie?” He loved the smell of her today. He could pick up the chlorine from the pool, the white wine she’d been drinking, and the sunblock she’d kept putting on all day. If he tried, he could probably smell Gen’s shampoo in Danneel’s hair, or Jared’s vaguely piney scent clinging to her skin.

That shouldn’t excite him. And it didn’t. Jensen wasn’t into guys. The fact that he could share the most intimate parts of his life with the best friend he’d known since he was four, on the other hand, that was gold. Jensen just couldn’t be excited by the knowledge that his wife smelled like Jared because she’d snuck off to romp with the giant tech mogul before guests got there, or by the fact that if he kissed into her mouth he could probably taste Jared there.

ms_doomandgloom
Fic Title: In Search Of Fields So Green
Author:

A/N: Thanks to my fantastic beta, twitter user SamgirlEli!

Also, I'm sure you can see why I was so eager to grab this RBB prompt. Ms_doomandgloom is a fantastic artist, and well Vikings and Meg and really...

The Monastery of the Queen of Heaven stood on an island just off the coast, far enough that reaching it took planning and effort but close enough that it could be seen from land if the day were clear.  Meg didn’t quite get it, but she didn’t get a lot of things about the whole arrangement.  Why name a facility exclusively for men, in which men were taught (from everything she’d seen and heard) to hate and fear women, after a woman?  Why raise boys apart from girls and women, and teach them to fear girls and women, and then turn around and expect them to marry women?

Back to Chapter Two -- On to Masterpost

Meg didn’t expect much when she went into her first meeting with Castiel. She went into the dungeon and found his cell easily, even though she’d never been here before. There were only so many cells, after all, and so many options for a cell that could possibly contain Castiel.

ms_doomandgloom
Fic Title: In Search Of Fields So Green
Author:

Summary: Meg's band of Vikings aren't just looking to raid Anglia. They're looking to build a kingdom of their own. Castiel is a warrior looking to defend the Anglo-Saxon kingdom.

Meg squatted by the fire and surveyed the map her two advisors had drawn in the dirt.  “You don’t think they know we’re here already?” she asked, tilting her head to look up at the brothers.  She brushed her hand across the glass beads at her throat, a nervous gesture she barely noticed anymore.

Back to Masterpost -- On to Chapter Two

Okay, there's more to it than that. I didn't universally like it, there were some things that I could have lived without, but I have to admit that all the pretty and wonderful Sam moments kind of blunted those edges. (Wow he looked good.)

On the whole, though, I really liked the episode. I really hope we see Eileen again.

Sam settled into the seat beside his brother. He hurt; everything hurt. Everything was supposed to hurt. He’d just gotten walloped by Lucifer, again. At least he’d just taken a beating. Dean hadn’t come in to find Sam flayed alive, or pinned down underneath the archangel while Lucifer took what he wanted. Or both – Lucifer could be greedy sometimes.

I was angry when they ended 11.09 with Sam back in the Cage with Lucifer. I'll state that right at the outset. I thought that the end result would be that everything Sam had accomplished with his sacrifice, and everything he'd gone through since then, would be undone and erased.

Guess who was right?

I want to start out by saying what I liked about the episode, because there were some really great moments. ( Collapse ) 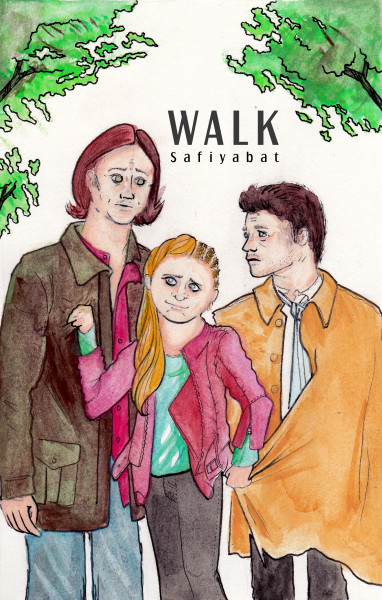 chasingparallax
Characters & Pairing(s): Sam/Castiel; Sam, Castiel, Claire, Dean
Rating: M
Word Count: 32,417
Warnings: show-level violence, depression.
Summary: When Sam gets a call from Jody saying that Claire has taken off, all he wants to do is help keep Claire out of trouble. If she absolutely has to hunt, she should do so safely and with the right information, right?

Castiel takes a dim view of proceedings, misunderstandings abound, and soon Sam finds himself hunting alone. Maybe all isn't lost, though. Maybe the presence of a bluntly spoken teenager is what Sam and Castiel need to break through the missteps and get to a point that's good for both of them.

Special thanks to my fantastic beta,

sweetsamofmine, and to my amazing artist

When this story was written, we knew absolutely nothing about the Darkness. It wouldn't be the first time that something had been released into the SPN world and then quieted down, so I went with that. (i.e., I ignored the Darkness.) I guess that technically makes it AU, but if you want to assume that the Darkness is out there running around doing Darkness things that's OK too.

Also, Dean comes off as not terribly nice, despite the removal of the Mark of Cain. My reasoning is that the Mark - the position of being the lock that held back the Darkness - had an affect on the personalities of both Lucifer and Cain; it wasn't reasonable to assume that Dean would suddenly be sunshine and rainbows once it was removed. I could have spent time focusing on Dean's recovery, but then it wouldn't be a Sastiel story. The story doesn't spend much time with Dean, so don't let that scare you off; I just wanted to warn for it. I've been pleasantly surprised by the brotherly relationship as depicted in canon s11; as I mentioned before, this was written over the summer, well before we knew anything.

Sam slept beside Castiel for the full night.  Cas didn’t – he was an angel, he didn’t need sleep – but Sam woke up next to him all the same.  “I heard from Claire,” Cas told him.  “She texted me several party hat emojis and slept in the other room.”

Back to Chapter Six -- On to Masterpost
Collapse